Just dropping in to leave this video here (umm, what an awesome way to ring in the New Year?!):

This one’s for my mom, who is a big Adam Lambert fan. Meanwhile, I’m sitting here with a serious old man crush on Roger Taylor. I swear, it’s a real problem sometimes. :\

I’ve been watching entirely too many Queen videos on YouTube this past week, and as a result I’ve had a pretty fun time putting this post together. It also means I’ve made no progress updating the rest of my old posts, but oh well.

Among my YouTube finds was an interview where Freddie was talking about Queen’s music videos, and how he didn’t want a video to alter the listener’s own impression of the song too much, so the band purposely made their videos kind of vague and bizarre—without any clear message—so as not to impose on anyone’s personal image of the song. Inspired by this, I put together a Top 5 Random Queen Music Videos that fit the bill pretty well:

1. It’s A Hard Life – just a really good excuse to dress up
2. We Will Rock You – snowy backyard music video…they look so cold!
3. I Want to Break Free – already mentioned this one in an earlier post but it’s just so perfect
4. I’m Going Slightly Mad – I guess this one actually fits the song, but I like the video regardless
5. The Miracle – kids as Queen = cute, but also weird

Top 5 Roger Taylor Falsettos
Because in addition to being super adorable, his upper vocal range is CRAZY!
1. In the Lap of the Gods
2. ’39 – I am in love with this song btw
3. Bohemian Rhapsody – a cappella version for maximum clarity
4. Somebody to Love – the whole song, sooo good
5. My Fairy King 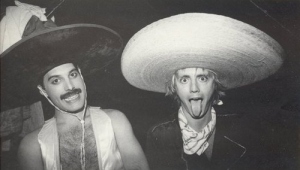 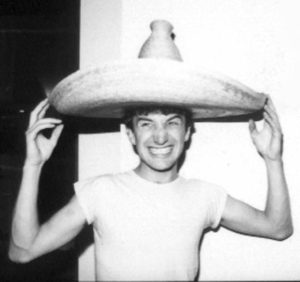 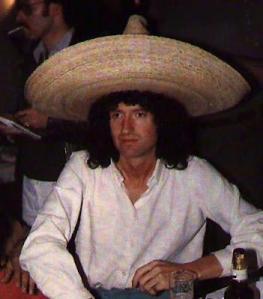 Brian, BE HAPPIER ABOUT THAT SOMBRERO. IT LOOKS GREAT ON YOU.

Man, I can’t believe it’s taken me this long to go through a Queen phase. They are such a great band. I’m sure I’ll be back with more soon.

Oh, hello. Sorry for the hiatus. As you can see, I was busy moving this blog to WordPress!

(Ok that’s a lie…I did the blogger-to-wordpress thing all this morning; it took like an hour, tops. The rest of the time I was just being lazy.)

But I figure it’s time to finally break the dry spell, 1) because I have this sweet new blog and 2) because it’s a good day for rock & roll birthdays. 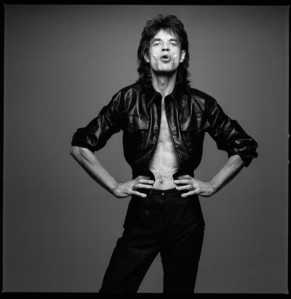 Second, happy 65th to Roger Taylor of Queen. Amazingly, I’ve only just started getting obsessed with Queen. I’ve always loved their music (who doesn’t?) but have recently started to watch some interviews and read a bunch of wiki articles and as per usual, it’s gotten me hooked on these guys. With the exception of maybe mid-60s Keith Moon, Roger Taylor is the only rock drummer I’ve ever considered to be absolutely adorable. Look at his face!!

Also, video proof. What a doll.

Speaking of which, I just saw the video for “I Want To Break Free” for the first time. Men in drag aside, can we talk about this a little bit? What’s up with all the spandex and grapes in the instrumental section? Is Freddie wearing Vulcan ears? And how is Roger just so PRETTY? I have a feeling that much of my weekend is going to be spent watching Queen videos, and I’m super cool with that.

And finally, it’s also Dan Konopka (my OK Go counterpart)’s birthday! More to come on this later, but while I was standing outside The Independent before OK Go’s SF show earlier this month, Dan walked right past me twice, but I was too awkward to say hi. I found it funny that a guy outside asked him if he was waiting for a ticket (for the sold out show that he was headlining? don’t think so…). In fact, all four members of the band were outside before the show, and no one (except Damian, a couple times) got recognized. What a perfect amount of fame. Can’t wait to see them again in SLC!

Oh, by the way, you may have noticed that along with the new blog came a new blog name. Electric Kool-Aid was sorely outdated, although I do still recommend the book if you ever want to experience a day in the life of a Merry Prankster. Flip the Record just fits better with the overall purpose of this blog, and after literally months of trying to think of a new name, I liked this name the most. Hope you do too!