I’ve been working on this post on and off for over a year now, waiting for the right moment to post it. I think the time has finally come, seeing as OK Go has just announced their new album and a summer tour. IT’S ALL HAPPENING! *cue confetti*

I think most people know by now that OK Go is my favorite non-60s band. Oh No was the soundtrack to my senior year of high school, just like Of the Blue Colour of the Sky perfectly defined my last year of college. Most importantly, OK Go will always be associated with some of my fondest memories of growing up—including hours of video-filming with best buddies Alie, Jocelyn, and Lauren. Their music kept the four of us together even though we were quite evenly spread throughout the country post-high school. We reunited for shows, bought new albums together, and sent each other links to music videos. If the trend continues, I have a feeling 2014 is going to be a very good year. :)

A chronological list of our many encounters with OK Go
(and how I became Dan’s creeper friend on Facebook):

1. The Dance Video. It was winter break of 2005, halfway through our senior year of high school, when Jocelyn had the ingenious idea of recreating OK Go’s “A Million Ways” music video. At the time, I’d never heard of the band, but was easily sold by their excellent dance moves and stylish attire. As a result, the four of us spent nine hours on the last day of winter break learning the carefully-choreographed dance, and when it got too late to film the final video, we devised a plan to film it during a five-minute break at lunch the next day, which was the last chance we had before Lauren flew back to the east coast that afternoon (The Plan involved Lauren sneaking onto the Vista High campus by pretending she was having lunch with our assistant band director).

At this point, YouTube was only about a year old and although it’s hard to believe now, putting your homemade fan videos online was still a novelty. We actually emailed the band with the YouTube link to our video, on the off chance that they (or someone in their crew) would see it and be amused. The next day I got a reply from drummer Dan Konopka himself(!), complimenting our efforts. Because I played Dan in our video, I thought this was especially awesome.

2. The Dance Contest. That summer, OK Go held a video contest on YouTube, encouraging fans to make their own Million Ways dance video and post them on OK Go’s page. Of course we entered the contest, and of course we didn’t win. But we still each got an “I Lost the OK Go Dance Contest” trophy (they must have mailed out so many of those) and the satisfaction of knowing that ours was one of the first Million Ways videos ever made.

3. The Colbert Report and 1.5 seconds of fame. At the end of the summer 2006, sometime before heading off to college, I received the following message on YouTube, which is still in my inbox: Hello! I work at the colbert report and we’re interested in featuring your video on the show (tonight!) Obviously, because of the time frame, I need to know ASAP if this interests you. Um, yes it interested us?! After a bunch of frantic form signing and scanning, we gathered a small audience and watched our video on The Colbert Report that night, for about a total of 1.5 seconds (around 2:55, if you’re interested). 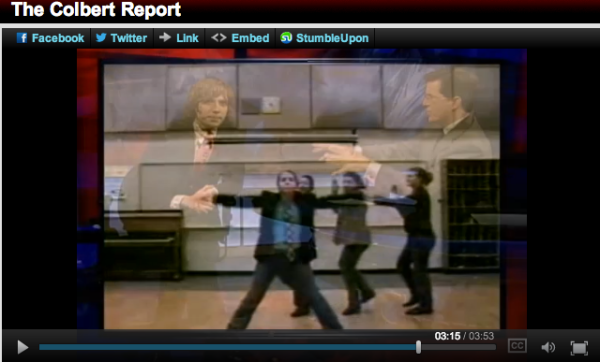 (Side note: the treadmill video also came out that summer but I was on tour with Esperanza, and didn’t see it until I got back in August. Suddenly, everyone knew who OK Go was! I have very distinct memories of seeing “Here It Goes Again” all over the TVs at the John Wooden Center at UCLA.)

4. The Extras. The band also released a special edition of Oh No with supplemental material, including a bunch of fan videos. Our Million Ways video was once again featured, after some more tricky release form-signing (at that point I was in California, Lauren in Massachusetts, Jocelyn in Idaho, and Alie in Utah).

5. The Voicemail. One day, OK Go visited Harvard, which happened to be where Lauren went to school. From what I understand, the visit mostly consisted of them playing Guitar Hero and meeting people. Lauren got to talk to the band and even had Dan Konopka leave a voicemail on my phone (what would I have said if I’d answered the call?!). I wish wish wish I still had the voicemail, but to my infinite dismay it departed along with my outdated flip phone.

6. The Guitar Pick and Autumn Leaves. Over the next few years, I saw OK Go in concert 6 times, including at the beach (Encinitas Bro-Am) and in the forest (Stern Grove in SF). At the first show I went to in Hollywood, I caught Andy’s guitar pick when he threw it into the audience, but a psycho girl literally PRIED it out of my hands. At another show with Jocelyn, Damian came out into the audience and stood DIRECTLY in front of us to play “Autumn Leaves.” He even turned around halfway through the song so that his butt was no longer in our faces. Photographic evidence (no zoom on these pics):

Another time, when Lauren, Jocelyn, and I went to their show at the San Diego House of Blues, we saw the band strolling down the street outside the venue, because they could. OK Go definitely has a devoted following, but aren’t so crazy-famous they can’t just hang out wherever they want. Which brings me to…

7. The Picture Frame. Fast forward to 2010. The winter after graduating college I worked a seasonal job at Aaron Brothers in Studio City. I hated it, BUT, a couple days before Christmas, who walks in but Dan Konopka. He was looking for a picture frame for his mother-in-law and I HELPED HIM PICK IT OUT. I think the first thing I blurted out when I saw him was “I know you!!” which, out of the blue, is a really weird thing to say. Dan looked confused and I tried to save myself by explaining what a big fan I was of his band (I didn’t reveal that he had once left a voicemail on my phone, or that I had an email from him saved in my inbox, or that I was his counterpart in our Million Ways dance video). He was super nice and I think a little surprised at how excited I was to meet him. But after all that, how could I not be?!

Apparently after that I friended Dan on Facebook (I actually have no memory of doing this, I’m sorry for being so creepy, Dan!) and luckily/strangely, he accepted. So now I get to see pictures of his adorable son and the occasional OK Go update and it always brightens my day.

Since that awesome encounter, there have been a lot of milestones. Alie got married, Jocelyn got married, I moved to San Francisco, and Lauren moved from Cambridge to Indianapolis to Fullerton to Minneapolis to Palo Alto! It’s been 8 and a half years since Jocelyn fatefully introduced the rest of us to OK Go, and I am so, so glad she did.

A message to the band: thanks for all the memories, and see you this summer!

2 thoughts on “A personal and humble tribute to OK Go”