Skip to content
Last weekend was the Hardly Strictly Bluegrass Festival in Golden Gate Park, which we used as a way to gauge how crowded our new neighborhood can get (a lot of buses overflowing with concert-goers, but the HSB crowd is generally more mellow than, say, the Outside Lands crowd, so it wasn’t bad at all!). 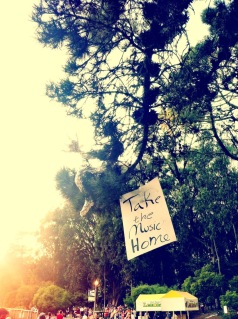 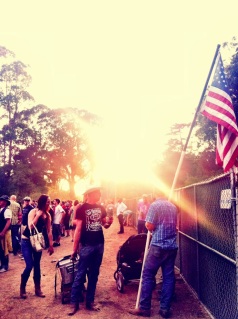 My dad goes to the festival every year. We met up with him on Saturday morning for brunch, then dropped him off at 30th and Fulton (weird role reversal: the two 25-year-olds dropping the 66-year-old* off at the concert, double checking that he has sunscreen and water). I only went for the last part of Sunday, once the crowd had died down a bit.

I watched a little bit of Gogol Bordello, then wandered to the Banjo Stage, following the sound of Emmylou Harris and Rodney Crowell playing one of my favorite Gram Parsons songs, Return of the Grievous Angel. Emmylou plays the festival every year, but it was my first time seeing her so I’m glad I stuck around (I’ve been wanting to see her since becoming infatuated with Gram Parsons and his albums GP/Grievous Angel, and her voice sounds just as amazing as it did on those records!).

As I was leaving, I also caught some of The Wood Brothers, who were really cool. It was a good end to the weekend, and the best part was that the festival was only a 20 minute walk from our apartment! Still can’t wait to get a bike and enjoy the park (it’s practically our backyard, after all).

I’ll end with a video of Chris Isaak playing Great Balls of Fire, which came highly recommended by my dad and his buddies. Complete with fiery piano!

*Sorry for revealing your age, Dad!