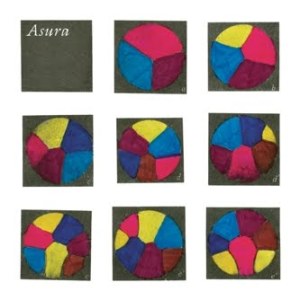 My friend Ryan just released his first album under the name Asura, and I want to celebrate it with a blog post! The official release date is tomorrow, January 19, but I was lucky enough to hear the entire album on vinyl last quarter when a small group of us got together to preview it. The record label, Non Projects, is a local label founded by recent UCLA grad Brian Simon, and also features LA artists Nicholas Morera and Ana Caravelle.

I’ve had the immense privilege of seeing Ryan/Asura at work, both creating and performing his material, and I have to admit that I previously had no idea the kind of detail and attention that goes into creating this kind of music. I’m hesitant to call it “atmospheric” because it’s way more layered and powerful than that. I’m also trying to avoid the word “electronic” which usually makes one think of techno or dance, and besides, a lot of the instrumental parts were actually recorded by Ryan himself, as well as the vocals. Just check it out yourself!

Asura on Boomkat – you can listen to all of the songs but there are pesky little beeps every 30 seconds to prevent copying. My favorites are “Manzanita”, “Timber”, and “Feathers”. I can’t wait to get the album on vinyl!