My most recent Netflix movie was The Gold Rush (Disc 2, to be exact). It’s the only Charlie Chaplin film I hadn’t seen and I’m not sure why; a lot of people say it’s their favorite. 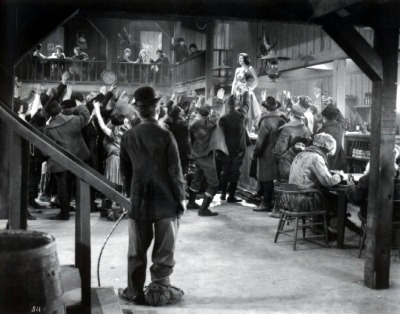 Awwwwww. I loved it! There are two versions of the film, one is the original 1925 silent movie, and the other is the re-released 1942 version, with Charlie’s own score and narration. Even though his music is a hundred times better than the original, everyone seems to hate the narration. I’ve only watched part of it and I have to agree. Nothing against Charlie’s cute, often-melodramatic English accent, but it’s not a silent movie when there’s talking!! Besides, the “capslock rage” title cards were one of my favorite parts of the original, haha.

Another interesting tidbit: the ending was altered in the 1942 version. Below is the original, where Charlie kisses the leading lady Georgia Hale. Apparently there was a lot of drama between the two of them in real life, and he later omitted the scene out of spite and/or embarrassment.

Anyway, point of this post: if you ever watch The Gold Rush, watch the SILENT version. It’s way better. The end.